Background: The superabsorbent polymers based conducting hydrogel such as polyaniline impregnated polyacrylate-starch hydrogel were synthesized via two -steps interpenetrating polymer network process. In the present work instead of using a synthetic polymer of acrylamide, a biodegradable polymer such as starch has been used with polyacrylate superabsorbent polymer. The main attempt of this work is to analyze the electrical conductivity of resulting hydrogel at varying concentrations of crosslinker, initiator, monomer, and a copolymer for improving the properties of synthesized hydrogel and elaborating the diversity of its utilization.

Methods: The polymerization of aniline was performed through the absorption of aniline monomer into the polymer matrix followed by the addition of initiator/dopant solution. The morphological and structural analysis and thermal stability of the synthesized hydrogel were studied using Scanning Electron Microscopy (SEM), Fourier transform infrared spectroscopy and thermogravimetric analysis (TGA), respectively. The swelling behaviour of the synthesized hydrogel was performed in a different medium. 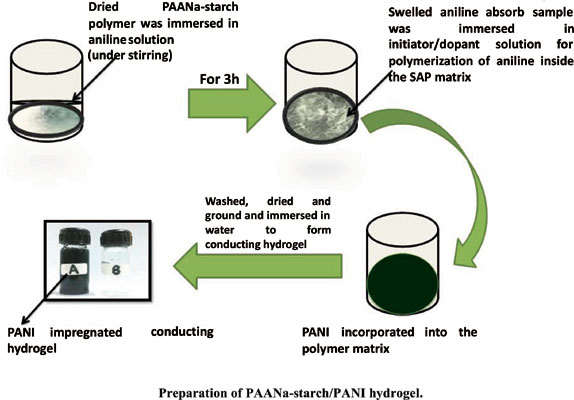